“Building The Fence” by a McGill Volunteer 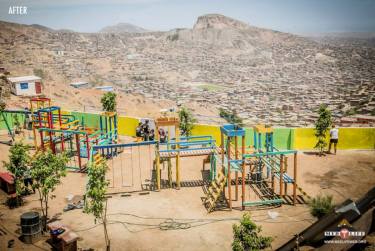 When I had registered for the first ever MEDLife Development Corps trip with McGill last February I had no clear idea what to expect. I knew that we were travelling to Lima-Peru to build a fence around a vibrant little playground in a suburban area of the city, called Laderas Nueva Esperanza. What I didn’t know was that we would gain exponentially more from the people of this community than we could ever give back to them.

Arriving early on our first day of development work, the bright swings and slides awaited us down several flights of stairs, and so did many members of the Laderas community. The playground was built by a North American church group, which was poorly placed on the edge of a rocky decline and subsequently left without a fence. Our job was simple— to build a fence so the children could play safely.

The next few days were spent carrying materials down into the work area, moving rocks and sand, pouring concrete powder and water, mixing the materials into concrete, filling buckets of concrete, pouring concrete, and repeating the process. Although our workday consisted entirely of manual labour, we had the opportunity to spend that time working side by side with the members of Laderas de Nueva Esperanza. During lunch break, the kids, women, and men would eat, talk, laugh, and play with us; the women often brought us homemade chicha and other homemade snacks, like boiled yucca and eggs.

After a busy workday, we would explore the downtown core of Lima around the Miraflores district, the area around our hostel. We’d walk down to the beach or to President Kennedy Park where you could see artistic performances (singers, stand-up comedians, painters) and cats roaming freely around. We were encouraged by MEDLife leaders to explore the many things Lima had to offer to us, from checking out restaurants in a restored Spanish mansion in Barranco to Sunday salsa dancing in downtown Lima. They even organized a boat trip through the southern coastal region of Peru, in Paracas (sometimes called the mini Galapagos of Peru), which also included a sand boarding and a ride on a dune buggy through the Ica desert by an oasis. We also visited a Peruvian winery and tried both wine and the world-famous Pisco.

It is definitely shocking to see the disparity of wealth between communities like Miraflores (the borough where we were staying) and Laderas de Nueva Esperanza, especially due to their proximity. However, that is why I think MEDLife’s initiatives are so important: they provide essential services and development projects to communities that need help but more importantly to communities that want help. Carlos, our leader, works closely with the communities to see what are their priorities and needs, like the fence was for Laderas de Nueva Esperanza. The full-time MEDLife staff in Peru, from the nurses to the administrative employees, is dedicated to making the Organization’s efforts more sustainable so that projects are not left half-finished, but rather evolve.

Summarizing the trip to Lima and Laderas de Nueva Esperanza is not an easy task. The development trip allowed my group and I to provide a means to alleviate poverty by collaborating with local families in improving their quality of life. I left Lima with a lot more Vitamin D, muscles, and knowledge than when I had arrived a week earlier –and also a bittersweet feeling of saying goodbye.