The MEDLIFE McGill MEDTalks conference series dives into hot topics in international charity and developmental aid work. Each conference will present current issues in development and address challenges faced while pursuing this work both locally and worldwide.

Come learn more on Wednesday, March 26th at 7:00 pm in the Lev Bukhman Room in SSMU. This semester’s conference will be on Health & Development. Doors open at 6:45 pm and refreshments will be provided. RSVP to our Facebook event.

Creating supportive environments for health: What boat do you want to be in?

Dr. Anne Andermann is an Associate Professor at McGill University, Regional Medical Officer for Health Canada’s First Nations and Inuit Health Branch (FNIHB), Chair of the public health theme for the new undergraduate medical curriculum at McGill’s Faculty of Medicine, and founder of an international research collaboration (www.mcgill.ca/clear) that aims to help frontline health workers address the underlying social causes of poor health through a combination of direct patient care, referral and advocacy for larger social change. Dr. Andermann has previously worked on research capacity strengthening for low- and middle-income countries at the World Health Organization in Geneva where she was also a member of the WHO Research Ethics Review Committee and a main contributing author of the World Health Report 2008 on increasing universal access to primary health care. She is the Medical Specialist in Public Health and Preventive Medicine at Health Canada’s Quebec Regional Office, a Public Health Physician at the Cree Health Board, Chair of the Community Oriented Primary Care Committee (COPC) at St Mary’s Hospital, and the focal point at the McGill Faculty of Medicine responsible for incorporating a greater emphasis on the social determinants of health and a population health approach into the new medical school curriculum. Dr. Andermann was recently awarded the Canadian Rising Stars in Global Health award from Grand Challenges Canada and the Clinical Research Scholars award from FRQ-S. Her new book entitled Evidence for Health: From Patient Choice to Global Policy is now available from Cambridge University Press at www.cambridge.org/9781107648654.

Mr. Claude Leblanc is currently the adjunct director at Collège Beaubois, overseeing grades 7, 8 and 9. He earned a specialized bachelor’s degree and a Masters degree in theology, as well as a certificate in education before becoming a teacher at Collège Beaubois in 1990. Over the years, he taught the following courses: personal and social development, career orientation, ecology, English, computer science, geography, science and technology, as well as ethics and religion. Moreover, Mr. Leblanc co-founded an international cooperation project in Senegal for grade 10 and 11 students and contributed to the instalment of fair trade practices in student-run initiatives. He also helped install the project École Verte Burntland in his school, a movement aiming to promote sharing, cooperation, equity, solidarity, respect, peace and human rights within the workplace and the learning environment. Finally, he recently contributed to associating Collège Beaubois to UNESCO, in part through his work in Senegal, and thus allowed for the deep involvement of his students in the debate on international development initiatives and human rights protection. 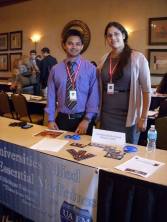 Diane is a PhD candidate in Microbiology and Immunology at McGill University. Her research at the McGill Aids Centre focuses on HIV- host interactions in the context of innate immunity and drug resistant viruses. During her undergrad she worked for the Office of Clinical Trials at Health Canada and completed an internship at the National HIV and Retrovirus Laboratory in Ottawa. She has been a human rights and HIV/AIDS activist since 2004 for issues ranging in advocating against the closing of harm reduction sites to anti-poverty campaigns with OXFAM. Diane has been a member of Universities Allied for Essential Medicines (UAEM) since 2009 where she has worked on the campaign to pass Canada’s Access to Medicine’s Regime (CAMR) Reform Bill C-393. She has also attended the 2013 World Health Assembly as part of a delegation of UAEM students to push for the passing of the WHO Global RnD treaty. Currently, Diane is a member of UAEM’s coordinating committee where she continues her advocacy work regarding the RnD treaty in addition to leading campaigns on access to medicines in international trade policy.

The homeless of St. Michael’s Mission and the impact you can make 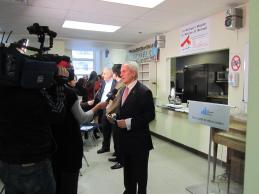 George was a business leader in the lingerie industry, while remaining greatly involved in the community inciting his employees to volunteer. He eventually sold his company as he felt the desire to spend more of his time giving back to the community. As early as the 1990s, homelessness has been the main cause that he takes to heart. His organization of choice is St. Michael’s Mission, which works with homeless people in downtown Montreal of which George is now Executive Director.
George comes from a large loving family who gather often and support each other. George’s role model was his Mom who taught that it was better to give than to receive. George will be speaking about the Homeless who frequent the Mission and what impact you can have. As George is famous for stating, “they are homeless, not helpless”!