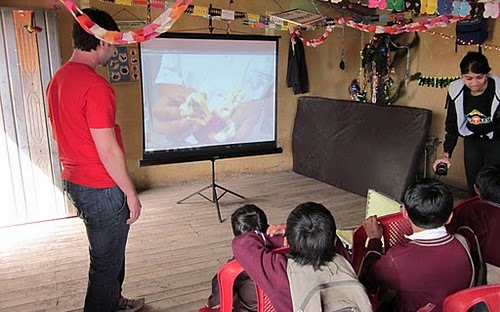 Today, I was placed on project duty. It consists of helping the locals of Pull San Pedro build a bathroom for their school. Surprisingly enough, we ended helping in other ways. Emily, Esther, Francois, Kate, Yang, Sonja and I were dropped off at Pull San Pedro while the rest of the MEDLIFE brigade moved onto the next village to set up the clinic.  At first, we stood in the courtyard waiting for instructions and watching the village men wrestle down a few trees. The children were hiding in the entrance ways, giggling at us gringos. (Their teachers realized what a attraction we were for the kids and eventually let them come out and meet all of us.) We felt like parents at a Justin Bieber concert, taller than most and not completely sure what we are there for. 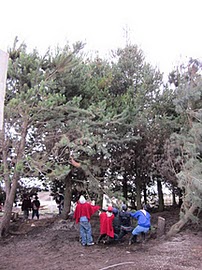 After a few minutes, the women of the village started working on expanding the courtyard, using hoes and shovels to break the old field. It was then, through much miming, we managed to ask if we could help. I’m not sure if it was because they actually needed the extra hands, or because they just wanted to see strange foreigners have a go at manual labor, but they accepted our offer.  I have the utmost respect for the villagers that we worked along with. Their tools were primitive, but had a certain simplicity to them. All the women worked in traditional Ecuadorian clothing (long skirts, a hat, several layers of sweaters and rain boots). I even saw one working the entire day with an infant strapped to her back. The general mood of the group was relaxed. There was no rush to finish, yet there were no breaks in the workflow.

The first half of the day consisted of breaking down concrete, shoveling, making inappropriate hoe jokes and wheel-barrowing tons of dirt and rocks. These were unlikely tasks for a party of out of shape university students whose most recent idea of heavy lifting meant carrying a biology textbook to class and doing cardio meant climbing up to the fifth floor of the library. After a few hours, we heard the “gringo alarm” (a loud siren usually used to signal the start of the clinic), and the teachers invited us into their lounge and treated us to a local snack. It consisted of bread, boiled eggs and an amazing drink (soy, grains and many other nutritious ingredients). Yang was kind enough to teach us the fastest way to eat a boiled egg (ask him, if you´re interested).  After our snack, we went back to work.

The men were moving the remnants of the pine trees that were cut down earlier. We jumped right in to help; pine sap ended up everywhere. Once that was done, we moved onto extracting stones from a pile of dirt and subsequently used them as foundation for the soon to be larger courtyard.  By 1300, the bus arrived to pick us up. We were saddened that we were unable to cover the entire courtyard in stone, but still satisfied by the amount of work accomplished during the course of the day. While the day was rewarding, I am very excited to head back to the clinic tomorrow, and more excited to see the new bathroom after the week is done.

A note from Yang: We helped pull down a large tree (just so you know).